The MMA trailblazer: how BRAVE CF took the sport to ten new countries

By admin
Sep 16, 2020 Leave a comment
in KHK HOLDING COMPANY 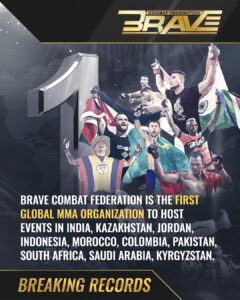 Unlike all other Mixed Martial Arts organizations out there, BRAVE Combat Federation was born as a global MMA promotion, with an international factor in its DNA. The Bahrain-based event, founded by His Highness Sheikh Khaled bin Hamad Al Khalifa has visited a staggering number of 20 countries in its four years of operations and, more than that, became the first international organization to host shows in half of those countries.

This international aspect was evident since the very first fight night held by the promotion, in the Kingdom of Bahrain, back in 2016. The show featured a variety of international athletes, becoming the first global MMA show to take place in the Middle East.

From then on, the trend only grew. BRAVE CF kept bringing together many nations under its umbrella but also traveled around the world. Literally. From North to South and East to West.

In doing so, BRAVE CF assumed the role of an MMA developer, increasing the reach and impact of the sport around the globe. The fastest-growing promotion in the world became the very first global MMA show to hold events in the following ten nations: India, Kazakhstan, Jordan, Indonesia, Morocco, Colombia, Pakistan, South Africa, Saudi Arabia, and Kyrgyzstan.

Thus, BRAVE Combat Federation lives up to its values of empowering the sport of Mixed Martial Arts and putting together the strongest scouting program on the planet, which really takes the sport to all parts of the world, reason why the largest media property in Asia is so praised inside and outside the industry of MMA.

Through the following weeks, BRAVE CF will return home, to the Kingdom of Bahrain, where it all began, with a series of events labeled as “Kombat Kingdom”, three consecutive fight nights taking place in the MMA hub of the world.

Among global superstars in action, exciting prospects having the chance of their lives, anticipated title fights, and the prestigious Flyweight World Title Tournament, BRAVE CF will continue to pave the way for a new system to the sport of Mixed Martial Arts.