By admin
Oct 07, 2020 Leave a comment
in KHK HOLDING COMPANY 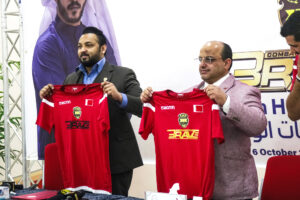 The partnership was established for an entire year and will last till December of 2021 with a chance of renewal upon completion. BRAVE Combat Federation and KHK Sports will be providing full support for the National Handball Teams, and be displayed on the National teams jersey’s starting from the 2021 World Handball Championship for Men hosted by the International Handball Federation in Egypt in January.

During the conference, the president of the National Handball Federation Ali Ishaqi expressed his thanks and appreciation to His Highness Sheikh Khaled Bin Hamad Al Khalifa, the first deputy chairman of the Supreme Council for Youth and Sports in Bahrain, and acknowledging the massive efforts His Highness has been providing to reshape and strengthen sports in the Kingdom of Bahrain. He noted that His Highness’ support is a pivotal part in the success of the federation and will positively impact the National Handball teams.