By admin
Sep 20, 2020 Leave a comment
in KHK HOLDING COMPANY 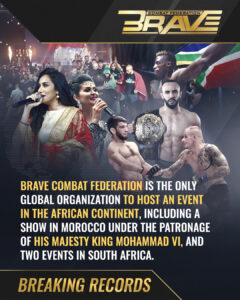 BRAVE Combat Federation, the Bahrain-based Mixed Martial Arts promotion founded by His Highness Sheikh Khaled bin Hamad Al Khalifa, is the fastest-growing MMA promotion in the world and the only truly global event in the sport.

Such features can be verified by looking at the impact that the Bahraini organization, which is the largest sports-media property in the Middle East, causes in other continents and territories.

BRAVE Combat Federation is the only international MMA event ever to host an event in the continent of Africa. More than that, BRAVE CF has done it multiple times.

The debut of BRAVE CF in the continent came through North Africa. Back in 2018, BRAVE CF held a massive fight night in Morocco under the patronage of His Majesty King Mohammad VI.

From there, BRAVE CF visited South Africa, one of the most important countries in the continent. For two consecutive years, BRAVE Combat Federation held shows in South Africa, visiting the cities of Durban and Sun City, near Johannesburg.

With the commitment of developing the sport of Mixed Martial Arts globally and the pioneering initiative of taking MMA to new markets, BRAVE CF has established itself as the biggest reference for African Mixed Martial Artists. Reinforcing its values of empowering athletes and sports on a national and global level.