BRAVE CF: the only organization to host events in 20 countries in less than 4 years of operations

By admin
Sep 14, 2020 Leave a comment
in KHK HOLDING COMPANY 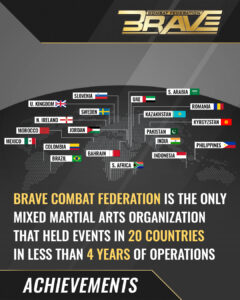 On September 23rd, BRAVE Combat Federation, the premier Mixed Martial Arts promotion founded by His Highness Sheikh Khaled bin Hamad Al Khalifa and based in the Kingdom of Bahrain, will complete four years of operations. It was on the same day, in 2016, that BRAVE CF 1 started a revolution in martial arts that extended from the Middle East across the world.

Since the very first event, BRAVE CF stood out for its unique vision and mission. The trend continued throughout the years and through the many achievements of BRAVE CF.

One of the most prominent ones, without a doubt, is the fact that the organization, labeled as the “truly global MMA promotion”, lived up to its name and traveled around the world like no other, offering a platform for international fighters and carrying the flag of the Kingdom of Bahrain.

In four years, BRAVE CF has visited 20 countries, in five different continents, a milestone that no other Mixed Martial Arts promotion has been able to achieve, proving that not only the vision but the execution and growth of BRAVE CF are unseen and unmatched.

BRAVE CF has prided itself in empowering otherwise overlooked regions of the world such as Pakistan and India, while also maintaining and furthering the investment made on traditional martial arts countries, like Brazil, England, and Mexico.

The Bahraini-born brand has also made its mission to grow the MMA scene in Europe, by hosting events and partnering up with local promotions and giving local fighters the global platform they truly deserve.

In Africa, BRAVE Combat Federation made history by becoming the first international MMA company to host an event in the continent, and has renewed its commitment with the African MMA scene by hosting events there in 2018 and 2019.