By admin
Jul 21, 2020 Leave a comment
in KHK HOLDING COMPANY 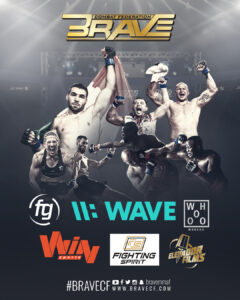 The Covid-19 pandemic forced BRAVE Combat Federation, the fastest-growing MMA organization in the world, to suspend temporarily its activities, with a series of events postponed.

BRAVE CF is finally back, with BRAVE CF 35, its first event back, taking place in Romania, but the months in which the organization shows were in hiatus were far from quiet in its headquarters.

BRAVE CF executives moved aggressively during the time off and took the opportunity to expand the brand coverage and reach even more, signing a staggering number of six new content agreements in a short period of time, and encompassing multiple territories in different continents.

Win Sports had previous experience with BRAVE Combat Federation when the truly global promotion visited the Colombian capital Bogota in 2019. The new agreement expands the partnership and includes a weekly show, with a primetime slot every Saturday on the channel dedicated to BRAVE CF content.

A similar deal was signed with Brazil’s Woohoo. The channel, which is available in more than 10 million households nationwide, will dedicate a weekly slot for BRAVE Combat Federation fights, focused and specially tailored to the Brazilian audience.

The impact in the social media area came with the agreement between BRAVE CF and the conglomerate Wave, which counts with more than 60 million fans around all its platforms. The strategic partnership will provide exclusive content to engage audiences around the world, expanding even more BRAVE CF’s social footprints.

The deal with the award-winning production company Elevador Films opens up new avenues for BRAVE Combat Federation, with the inclusion of new formats to be added to the promotion’s robust library, including, apart from the live events, documentary series and reality shows.

Last but not least BRAVE CF made official its partnership with the two largest combat sports content distribution companies in the world: Fighting Spirit and Fight Globe. Both agencies from now on will represent and increase even more the reach and audience of BRAVE Combat Federation media products.

Once more, BRAVE Combat Federation solidifies its position as the strongest sports media property in Asia by ensuring that all the impact caused by the fastest-growing MMA promotion inside the sports world is also matched by equally powerful business and media plans.